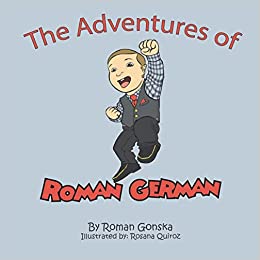 Dublin, Ohio, 4th-grade author, and entrepreneur Roman Gonska, who was at the inaugural New Americans Book Fair, in Columbus, is set to release the second book in The Adventures of Roman German series on Sunday, November 20, 2022. It is also his 10th birthday.

revealing the location of all the lost pieces of technology they were searching for in Book #1.

The team finds themselves exploring a cave on a high-tech train, charging through the streets of New York City, and diving to the bottom of the ocean as the mysterious origin of technology is slowly revealed.

Roman spent the past year crafting the immense universe the series takes place in while adding incredible depth and nuance to each character. The story grows, the stakes are raised, and the adventure continues in Book #2.

Roman describes the series as “exciting, mysterious, and funny!”

adventures have taken him to Australia, Spain, Tel-Aviv, and his current home in Columbus, Ohio. He

has taken inspiration from his travels and brought them to the pages of his adventure series.

dreams come true”, Roman also donates a percentage of every sale to Compassion International, an

organization helping those in the most extreme poverty.